The Lemp Brewery is a complex group of over fifteen buildings and areas that once produced some of the most popular beer in the U.S. After its founding in 1838, the Lemp family became one of the first beer empires in the nation. Their brewing complex was only blocks away from the competing Anheuser Busch beer barons.

We’ll go into further detail about the fascinating Lemp Family in another haunted installment. But for this edition, I interviewed HauntedSTLtours.com owner Lacey Rhinehardt about disturbances in the Brewery and its checkered history. We’ll also feature our photographic take of a haunted Alice in Wonderland White Rabbit and Steampunk Phantom of the Opera. Photos are by Kim Ackerman, Victoria L. Szulc, and Ken Schmidt.

An Ancient Historian, Lacey Rhinehardt, describes the area around Lemp Brewery as a region ripe with “layers of history.” The oldest known history involves the St. Louis nickname of Mound City. For hundreds of years, several different Native American tribes called this region home, including one pre-Columbian tribe that created the Cahokia Mounds over 1,000 years ago. These ancestors built numerous immense mounds of earth and developed the Mississippian culture of the modern Midwest. The mounds had a variety of purposes including religious ceremonies, burials, and even games. Close to 80 of these mounds still exist on the Illinois side of the Mississippi River. But most of the earthen structures on the Missouri (western) side were destroyed as the region was first explored in the 1700’s.

By the 1800’s, as St. Louis became one of the largest cities in the nation, the mounds and most of Native American culture were wiped away. Even William Clark, the great explorer, who had initially worked to unify the tribes and encourage trading, was eventually hired to move the Natives out during the Andrew Jackson presidential administration. This was the first in a series of events that caused disruption in the area where the brewery now stands.

In addition to developing the mounds, the Native cultures had access to a cave system (later known as the Cherokee Caves). Many of them used to run under the various breweries directly south of downtown St. Louis. The deliciously cool caves were soon discovered by the brewing companies. In the early 1800’s and were used to store and deliver their products.

The caves were also an important part of Civil War history. Some caves were used for human trafficking and escape routes for the Underground Railroad. Others were storage for guns, ammunition, and contraband.

As many of the smaller breweries collapsed during prohibition, a portion of the caves were opened to the public and could be toured.

Eventually modern transportation changed the caves forever. As Interstate Highway 55 was built, the caves were cut off, filled with debris, or collapsed. Another layer of history was disturbed.

As Lacey Reinhardt told me, “You have to be from here to understand the context of the city.” And part of that complex history is now known as the Lemp neighborhood. It was filled with German immigrants. The beer barons built up the wealthy mansions and estates. They often brought in and hired less fortunate German folk to work the factories, breweries, and properties. Add in that many of these stately homes were built from the famous limestone cliffs of the Mississippi. And limestone has long been believed to be a conduit for paranormal activity.

The area was largely self-policed. Often, when things went wrong, such as when the Lemp Brewery closed due to the effects of prohibition, a mob mentality often took over; yet another layer of history that haunts the neighborhood.

Ghosts of the Brewery

Where we did the shoot, there were several odd experiences. When we first set up to finalize a shoot date, photographer Kim Ackerman met with Lacey to tour the brewery. In front of one sealed archway leading to the caves, Kim shot an image where there appeared to be some “ghosting.” It’s not definitive, but more importantly, the area has an extreme “heavy presence.”

According to Lacey, this can be truly something supernatural as some paranormal experts have experienced. Or more commonly, they have been debunked EMF’s (electromagnetic fields). Most old buildings have antiquated electrical wiring and panels that still give off energy that can make any human experience a “weighted” feeling. Not only are these electrical stations near dangerous water sources, some have caught fire after they were assumed to be inactive.

One interesting (and newer) ghost tale from the brewery is about an artist that lived in the building where we shot. Most of this building is unfit to live in. Lacey explained that the artist passed away on one of the upper floors in 2015. As she and another associate removed the deceased’s personal items, Lacey thought her partner was occasionally passing by in the distance. However, later she found out her associate had never come to the floor that day. Perhaps she’d been visited by the artist? On further visits they would also find that some items had been moved when no one else had been in the building.

Update: note, the building section #20, just west of where we shot, collapsed on August 23, 2020. No one was hurt, but three small business lost storage and store front space.

The day of the shoot in the brewery was aptly rainy, cold, and dreary; a perfect atmosphere to shoot a steampunk phantom and his protégé Christine. Our stunning steampunk hare seemed haunted as well.

There was deer feces scattered in many parts of the building, especially in the entrance. Mind you, the building is now completely sealed. There is no way a deer could’ve entered the building. Deer (and fabled ghost stags) have long been sacred to many Native American cultures. Perhaps those that lived on those mounds wanted to reclaim the long abandoned brewery for themselves?

Victoria L. Szulc is a multi-media steampunk artist and author. Her re-releases of her whole writing catalog have started with “The Long Moonlight”, v.1 of the Vampire’s Little Black Book Series, and “A Stairway”, a revised steampunk short, will be released October 5, 2020. 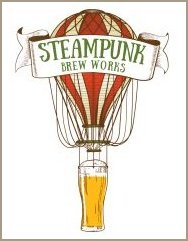